Despite being the driving force behind the cookieless future, Google isn’t immune from its impact. With Google PAIR, the AdTech giant is setting its sights on first-party data, making these audiences securely targetable in DV360 through the use of matching via data clean-rooms.

What is Google PAIR?

Google PAIR, or Publisher Advertiser Identity Reconciliation, is a tool available in DV360 designed to securely reconcile first-party data sets between advertisers or brands and publishers. Because PAIR matches advertiser data directly with publisher data – and doesn’t rely on Google’s own data – it can be used via any SSP.

As described by Dan Taylor, Google’s VP of Global Ads, in the announcement blog post: “Publisher Advertiser Identity Reconciliation, or PAIR, is a new solution that gives publishers and advertisers the option to securely and privately reconcile their first-party data for audiences who have visited both an advertiser’s and a publisher’s site.”

In short, Google PAIR is a way for advertisers, brands, and publishers to activate their first-party data via clean-rooms through DV360.

How does Google PAIR work?

At the moment, PAIR achieves the reconciliation of first-party data via integrations with third-party data clean-room solutions Habu, InfoSum, and LiveRamp – though Google plans to eventually integrate directly with its own Ads Data Hub (ADH).

It’s only natural that both marketers and publishers will be concerned about the risk of data leaks, so Google is applying an additional three-stage encryption layer. This involves the data being encrypted with a publisher key, an advertiser key, and finally a shared key for both parties. As Dan Taylor mentions in the announcement, “These keys are unique for every advertiser-publisher relationship and ensure there is no way for any one party to reverse-encrypt or identify users.“ The data used within PAIR is never pooled, meaning control of the data is maintained by its owners.

Following the encryption of both first-party data sets, the matching will take place within the clean-room environment, and PAIR will report a match-rate percentage. The matched data can then be leveraged for targeting within DV360 campaigns. 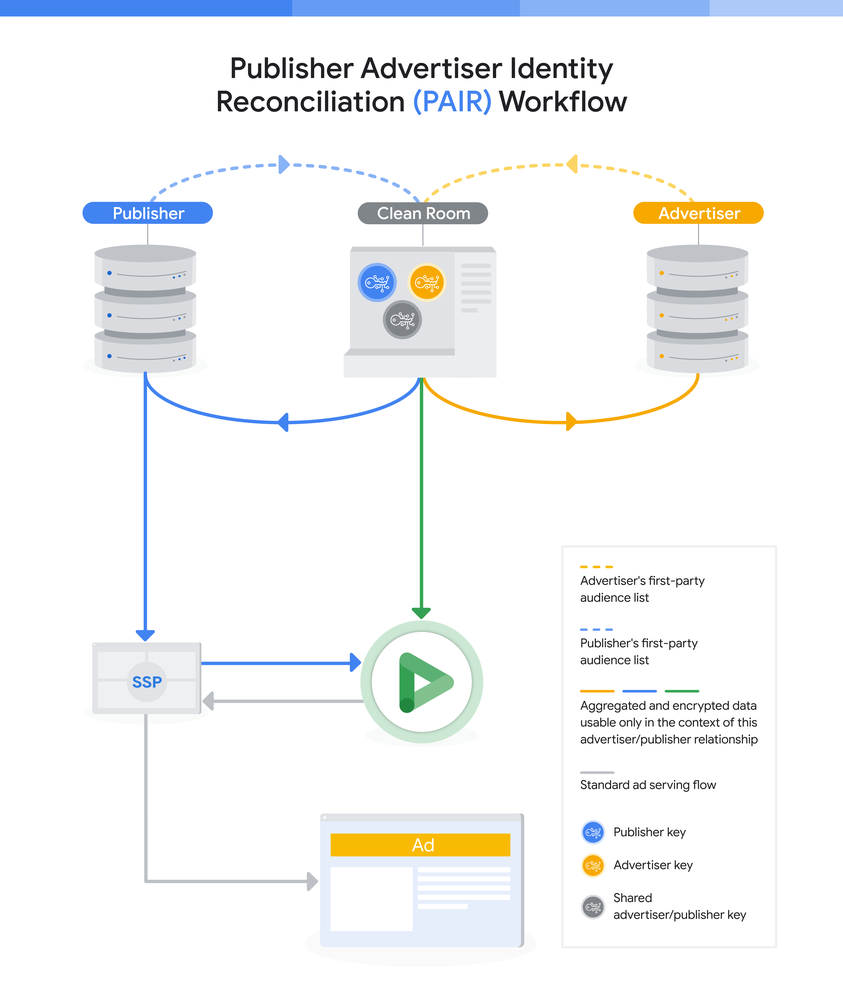 How does Google PAIR differ from universal IDs?

With a focus on identity and addressability, there are clear similarities between Google PAIR and the growing list of alternative ID solutions – but there are some key differences, too.

The primary difference here is that Google PAIR, as the name suggests, is focused on matching just two data sets. The goal is not to track users across the web, but instead to match them from a single brand or advertiser to a single publisher.

Of course, this one-to-one tracking means that scale will be limited to the data within each of the sets – with no guarantees of match-rates within those data sets, either. But remember: the goal here is not to create persistent, pooled cross-site user profiles, as with UID 2.0 and other universal ID solutions, but instead to target specific known users from one place in another.

For example, PAIR could enable an advertiser with a list of cart-abandoners to target those specific customers on a publisher’s site – assuming the publisher has matching first-party data, most likely an email address. PAIR could also be used to negatively target users who have already made a purchase in order to reduce wasted budget.

What does Google PAIR mean for publishers?

It’s clear that Google PAIR is yet another step towards a more open approach to AdTech from Google. With support for any SSP and third-party clean-room integrations, there’s no question that closer scrutiny from regulatory bodies is impacting Google’s product strategy.

So what does this all mean for publishers? WEBINAR: Get Your Tech Stack Holiday-Ready in Less Than 20 Minutes

WEBINAR: Could Seller Defined Audiences Be An Answer?